Turkish democracy is in grave danger

Ankara’s human rights and media record came under sustained attack at a public forum in Istanbul as a majority-Turkish audience warned against growing totalitarianism ahead of the June parliamentary elections.

Ankara’s human rights and media record came under sustained attack at a public forum in Istanbul as a majority-Turkish audience warned against growing totalitarianism ahead of the June parliamentary elections.

The New Arab Debates, held at the Bosphorus (Bogazici) University overlooking the historic waterway on Monday, provoked heated arguments between panelists and the audience before 76 percent voted in favour of the motion: “Turkish democracy is in grave danger”.

The mostly young audience criticized the policies of both the ruling Justice and Development Party (AKP) and the opposition, whom one audience member said were unable to form a “shadow government”.

Speaking for the motion, Dr. Binnaz Toprak, member of parliament since 2011 for the main opposition Republican People’s Party (CHP) said Turkish democracy amounted to “elected authoritarianism” in a polarized society.

“There are elections yes. But that is almost it,” said the former political science professor. “Separation of powers is problematic and so is rule of law. There is very little accountability, no transparency, restrictions on freedom of speech, on peaceful protests, on free press, media and social media,  problems with secularity, most appointments are no longer based on merit and  gender equality is a problem,” said Toprak.

The opposition is “doing poorly” because the AKP dominates parliament, the government is not in listening mode and President Recep Tayyip Erdogan does not tolerate dissenting voices.

Toprak warned democracy will end if Erdogan succeeds in moving Turkey towards an executive presidency via the ballot box.

Arguing against the motion,  writer and journalist Etyen Mahcupyan, who was appointed senior adviser to Turkish Prime Minister Ahmet Davutoglu in October 2014, said Turkey is a “democratizing country”, not a democracy. He said there was room for much improvement.

“This is a normalizing place not a normal place yet,” he said, citing challenges posed by a multi-party system under “bureaucratic tutelage” and an impartial judiciary.

He said he too was critical of many of the AKP policies but added that the party continued to do well in successive elections.

“Eighty years of history is on the verge of change, there is no way back and there are many enemies,” he said. “AKP is the only party which can deal with a future that is meaningful to the public and that is why they are getting those votes,” he said.

“There can be no dictatorship in this country,” he said.

A 23-year-old female student drew applause when she told Mahcupyan she wanted democracy today. “I do not care about the history of parliaments and the people who are already dead… I want democracy now while I am still alive.”

The New Arab Debates were founded in 2011 to stimulate free speech across the Middle East and the Levant. The fourth season of the Debates is supported by the Norwegian Foreign Ministry.

The debate will be broadcast for the fourth year on DW (Deutsche Welle) in English along with its global network of partners. 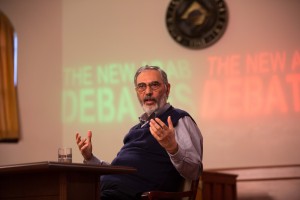 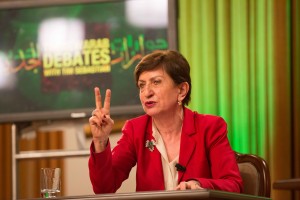 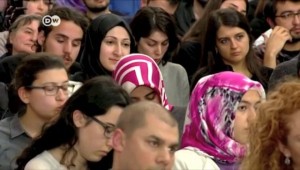