The Arab world is embracing extremism - not fighting it

“If you bring people from the whole world, even from Norway or Sweden, and make them live in the same conditions as the Arabs, you will get extremists coming from those nationalities,” – Professor Adnan Hayajneh (speaking for the motion).

“We are not democratic people,…”Freedom is a Western word.” – Dr. Musa Shteiwi (speaking against the motion).

Amman, January 18, 2015 -Just days after the attack on Charlie Hebdo in Paris, Arab regimes were accused at a public discussion forum of failing to fight the same extremists they had created.

Fifty-nine percent of the audience voted for the motion: “The Arab World is embracing extremism not fighting it.”  A vote before the debate had shown only 48 percent in favour.

Speaking for the motion, Adnan Hayajneh, professor of political science at Qatar University, said extremism had nothing to do with Islam. It was, he argued, a product of increasing state restrictions on free speech and moderate political Islam, as well as corruption, poverty and unemployment.

“If you bring people from the whole world, even from Norway or Sweden, and make them live in the same conditions as the Arabs, you will get extremists coming from those nationalities,” he told the audience, a cross section of Jordanian society, including university students and expatriates.

The West, he added, was only interested in keeping the region quiet through “crisis management” instead of solving its real problems, such as Israel’s occupation of Arab territories and the lack of democracy.

Arguing against the motion, Musa Shteiwi, professor of political sociology and Director of the Centre for Strategic Studies at the University of Jordan, said the majority of Arabs stood for freedom and democracy through peaceful means.

But extremists had hijacked the political process in the region, turning Syria, among others, into a proxy war for Arab and international powers.

The collapse of Iraq in 2003 and the failure of the Iraqi political elite to rebuild the state had also encouraged the rise of extremism.

“Democracy is not a status. It is a very long process of building institutions, culture and values,” he said. “The best approach against extremism is to enhance democracy and civil society.”

On the subject of the Charlie Hebdo cartoons, a Jordanian businessman condemned the violent response but said: “It is a horrible thing to come and hurt the feelings of 1.5 billion people. I respect French law but it might take 100 years for all of us to understand their rules.”

“We are not democratic people, ” he added. “Freedom is a Western word.”

The New Arab Debates, now in their fourth season, are a free-speech forum, founded in early 2011 by British television journalist Tim Sebastian.

Funded by the Norwegian Foreign Ministry, they offer an extensive outreach campaign in schools and universities with the aim of encouraging young people to participate in the political development of their country. 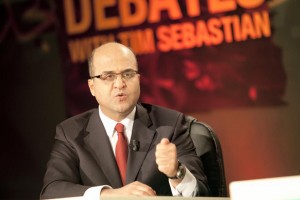 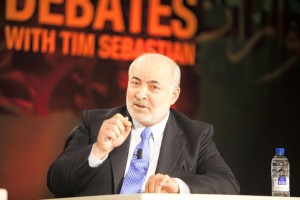